Welcome to Bereavementuk.co.uk. The original Bereavement UK support site since June 2000 helping 1000s of heartbroken people after the loss of their loved ones

Bereavement is indeed one of the most painful emotions the human body has to deal with during our lifetime. BereavementUK is here to support you no matter where in the world you happen to be.

Our site was created over 21 years ago to be a lifeline in helping especially after the initial support drops off where the phone rings less and less, and people call to see you much less frequently.  It's now when you're feeling totally lost and very alone, that BereavementUK will be of enormous strength and support for you.

The pain you may be feeling right now can seem almost unbearable at times, but will be fully understood and felt by the people of all ages we have in our support forum. Our members offer a listening ear, friendly support and advice with comforting words on those lonely days and nights.

The BereavementUK Support Forum plus a live Chat Room is where people who have lost loved ones will help you through this heartbreaking time, and I promise it really will help towards healing you. There are no professionals here, just people like yourself who by using their own experiences, will enable them to support and guide you through the grief, pain, anger, helplessness & loneliness you are now feeling.  You are not alone - come and join what is probably one of the best bereavement support groups on the internet so come see for yourself.

There is no charge, no payment is asked for ever, we do not sell books or services. You can join straight away with ease - just use the main menu above and follow the links.

May I offer you my sincere condolences for whatever reason has bought you here and I am glad you found us.

We also have very successful Facebook Groups for giving and receiving heartfelt support from well over 3000 members. It was also requested we had a light hearted group only for BUK members a little further down the line who want a smile given back without feeling guilty for doing so.   Also many 'mini meet ups' are planned all over the country for this year, where forum members often, very quickly, make lifelong friends with people who are experiencing the very same emotions that they are. All are welcome to join us for a truly heart warming  time where much laughter and uplifting of spirit can be found.

From members needing such a group, we have formed a sister group to the main BUK group for the very much needed support for the, "BUK Loss Of A Child"

Here is the direct link to. BUK The Loss Of A Child Support Group

Due to the amazing support she found at a very difficult time, Rita Kenyon (shown center), decided secretly to spread the word about BUK. She wanted to get this 'lifeline' on television to help many others out there and nominated it for the ITV GMB Health Star Awards.            Nominations from people using the forum poured in, and one very moving and heartfelt letter was chosen, written by Angela Pinner. From thousands this got BUK to the final 20, then the final 3. We ended up as the runner up and made it to the televised award ceremony in London on 24th April 2017. Dave, Forum Founder, was presented with this award by Debbie McGee, who lost her own husband, Paul Daniels last year, in 'recognition for all he had done, voluntary, to help others.' Dave accepted the award but said it was "On behalf of every member who has ever given support to another person on this amazing site." Please join us to see why Bereavementuk is recognised as being a true life saver for many thousands now over 21 years. 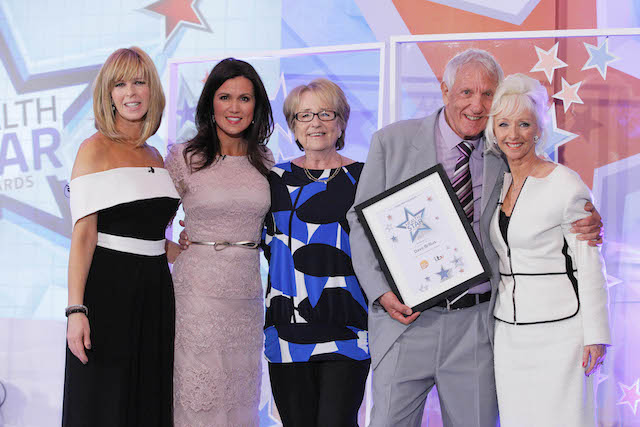 BUK Quotes   :
Rita Kenyon     :     "It was my lifeline, it really was"
Angela Pinner  :     "Here people connect totally with each other in their grief, pain anger, emptiness and helplessness - people who reach out through their own experience, support and guide others."
Norma Ashmore:    "I wouldn't be where I am today if it were not for BUK being a lifesaver"

The picture on this short video shows one of our regular BUK meet ups throughout the country.